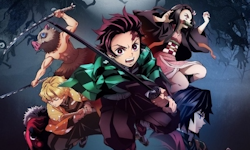 Since ancient times, rumors have abounded of man-eating demons lurking in the woods. Because of this, the local townsfolk never venture outside at night. Legend has it that a demon slayer also roams the night, hunting down these bloodthirsty demons. For young Tanjirou, these rumors will soon to become his harsh reality...

Ever since the death of his father, Tanjirou has taken it upon himself to support his family. Although their lives may be hardened by tragedy, they've found happiness. But that ephemeral warmth is shattered one day when Tanjirou finds is family slaughtered and the lone survivor, his sister Nezuko, turned into a demon. To his surprise, however, Nezuko still shows signs of human emotion and thought... Thus begins Tanjirou's quest to fight demons and turn his sister human again.

Check out Re:Zero - Starting Life in Another World

Re:Zero - Starting Life in Another World 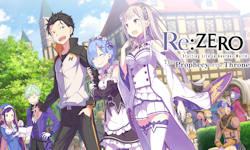 Natsuki Subaru is an ordinary high school student who is lost in an alternate world, where he is rescued by a beautiful, silver-haired girl. He stays near her to return the favour, but the destiny she is burdened with is more than Subaru can imagine. Enemies attack one by one, and both of them are killed. He then finds out he has the power to rewind death, back to the time he first came to this world. But only he remembers what has happened since.

Check out The Pet Girl of Sakurasou

The Pet Girl of Sakurasou 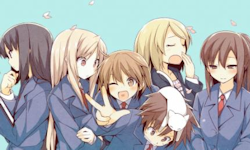 The second-year high school student Kanda Sorata lives in Sakurasou, the dormitory for problem children at Sorata's school. One day, Shiina Mashiro — a cute girl who happens to be also a cosmopolitan, brilliant artist — moves into Sakurasou.

Sorata knowing the weirdos at the dormitory feels he should protect Mashiro. Surprisingly she seems to need more help than expected: she has no idea how to take care of herself, i.e. often gets lost, and her room is a complete mess. Sorata's dorm mates designate him as the master of Mashiro, and thus, an ordinary boy and a brilliant girl live like a master and his pet. 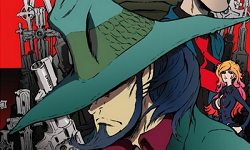 Lupin and Jigen have their sights set on a treasure worth stealing called the Little Comet which is located in the country of East Doroa. The country has fortified its border after a singer named Queen Malta got assassinated in the neighboring country of West Doroa upon visit.

Despite the two countries being enemies, Lupin and Jigen still plan to steal the treasure. During the heist, Jigen gets almost killed by a skilled sniper named Yael Okuzaki. His specialty is preparing tombstones for his targets before executing his kills. It's said that no one has survived after Yael makes a grave for that target.