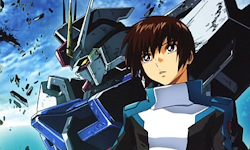 Heliopolis, a so-called neutral space colony was holding a top-secret weapons research facility, producing Gundams for the Earth Alliance. ZAFT, which is composed of Coordinators (genetically modified/upgraded humans), attacks Heliopolis, stealing 4 out of the Alliance's 5 Gundams. In the battlefield, civilian Kira Yamato stumbles upon the Strike, the last remaining Gundam of the alliance, and is forced to pilot it. In the midst of battle he encounters his best friend, Athrun Zala, as one of the hijackers of the 5 Gundams, who sides with ZAFT. Being a Coordinator, he is the only one who can pilot the Gundam. But Kira is not with ZAFT, even though they're his own kind, nor the Alliance. Since the Alliance is the only place he could turn to at the time, he sides with them. He pilots the Gundam to protect his friends, and to fight his best friend, which pains both of them. It's a war between individual beliefs. 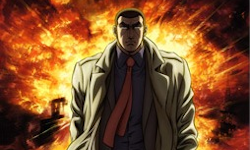 Duke Togo, aka Golgo 13, is a professional assassin. His age and birthplace are unknown and there is no consensus in the worldwide intelligence community as to his true identity. Most of his jobs are completed through the use of a customized, scoped M16 rifle.

Check out Soul Eater Not! 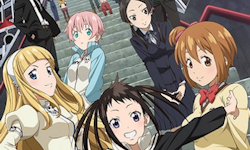 A freshman halberd named Harudori Tsugumi, befriends two other meisters, Tatane Meme and Anya Hepburn. All three take part in the NOT (Normally Overcome Target) class at DWMA and learn to control their powers in order to overcome their difficulties to have a normal life, as opposed to the battle-oriented EAT (Especially Advanced Talent) class taken by Maka, Soul, and their companions.

Check out InuYasha the Movie 4: Fire on the Mystic Island

InuYasha the Movie 4: Fire on the Mystic Island 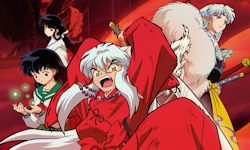 The island of Hourai, controlled by four demon gods. A girl who knows Inuyasha appears: "Ai." Unchanged for fifty years, what is this girl's secret? When the cursed seal comes to the surface, it begins Inuyasha and Sesshoumaru's newest battle!