Check out Baka and Test: Summon the Beasts (2)

Baka and Test: Summon the Beasts (2) 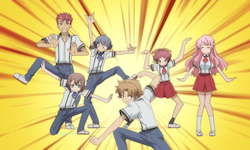 By utilizing the school's unique testing system, Akihisa and his classmates of class F waged a long and uphill struggle to take over the classroom of class A. However, their efforts fell short. Since then, a season has passed and it is now summer... 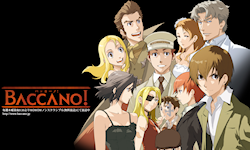 Baccano! (which translates to "ruckus" or "stupid commotion") focuses on the stories of different characters in the Prohibition Era of America. Originating back to 1711, a group of alchemists seeking eternal youth are given a special potion by a mysterious demon, making them immortal. However, alchemists began disappearing, and realizing the danger of being close to one another they scatter around the world.

Now in the 1930's, all of the immortals have come together once again. Baccano! tells the stories of each of these immortals, ranging from alchemists, street gangs, thieves, FBI agents and even the mafia.

Check out Aria the Scarlet Ammo 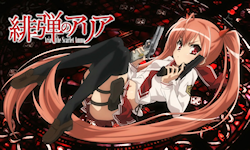 Tokyo Butei High School is a special school where armed detectives, also known as Butei, are trained and educated. Tooyama Kinji is a sophomore student, who can go into Hysteria Mode when "stimulated" — affecting his mental state (ultra-fast reflexes, protection complex) and manner of speech. He tries to hide this genetically inherited ability from others in order to live a peaceful life. But when he becomes the victim of a bombing incident, by a Butei Killer copycat, his quiet days are over with the fateful encounter with Kanzaki H. Aria — the Butei High "Assault" department elite.

Check out The Book of Bantorra

The Book of Bantorra 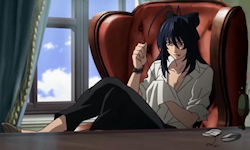 In a world where dead people turn into stone-like books and are stored in the Bantorra Library, anyone who reads a book can learn its past. Bantorra Library is maintained by the Armed Librarians, who wield supernatural abilities, and their enemy is a religious cult known as Shindeki Church.