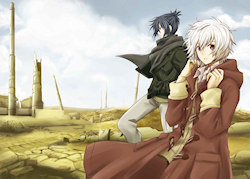 The story is set in No. 6, a future model city in 2013. Raised as a top-ranking elite since the age of 2, a boy named Shion lives in an exclusive area in No. 6. On the night of his 12th birthday, he rescues a boy who calls himself Nezumi (Rat). Nezumi ran away from the city's Special Security Area. From that moment on, Shion's life is changed forever...

Vampires exist. It is the duty of Hellsing, a secret organization sponsored by the British government, to hide that frightening fact and protect the blissfully unaware populace. Along with its own personal army, Hellsing has secret weapons. Alucard, an incredibly powerful vampire, has been controlled by Hellsing for years. It is unclear how he feels about being a servant to the Hellsing family, but he certainly enjoys his job as a vampire exterminator. Seras is a fledgling vampire and former police woman. Although reluctant to embrace her new self, she is a valued member of the organization. Integra Hellsing, the current leader, is usually fully capable of fulfilling her duty, but lately, vampire activity has been on the rise. Unfortunately, the cause is more alarming than anything she could have imagined. A group long thought dead has been plotting in secret since their apparent destruction over 50 years ago. Plotting to plunge England, and perhaps the entire world, into war. 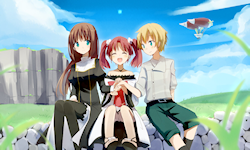 With the completion of the Fractale world administration system, humanity has, for the first time in history, attained a paradise where living is effortless.

Now, one thousand years after Fractale's activation, the system is still operational, but there is no one alive who understands it. The vast majority of people unquestioningly believe that its preservation is the sole condition to human happiness. On an island in the far corner of the continent Fractale begins to show signs of decay, though.

Clain is a boy who lives an aimless life. One day, he helps a girl, Phryne, who is being pursued by unknown assailants. However, she soon disappears again, only leaving a broach behind. The curious Clain successfully activates the antique data saved in the broach. And so, Nessa, a data avatar in form of a young girl, enters the boy's life.

Clain and Nessa leave on a journey in search for Phryne. In doing so, he will learn the truth behind Fractale.

A tribute to a great friend