The city of Sternbild is home to many people of different races, backgrounds, and those who are called Next. Next are people who possess special powers. They are the superheroes who protect peace within the city.

These heroes all have a corporate sponsor whose logo is displayed upon their backs. As they overcome disasters and save people, they improve the image of their sponsors. In addition, they earn Hero Points which determines their ranking on the popular Hero TV programme. The Hero with the most points gains the title of King of Heroes.

One of these Heroes is Wild Tiger (Kaburagi T. Kotetsu), a hotheaded veteran with a strong sense of justice. One day, he is suddenly partnered-off with newbie Barnaby Brooks Jr..

Check out Lagrange: The Flower of Rin-ne

Lagrange: The Flower of Rin-ne 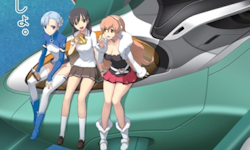 Kamogawa is a seaside city in the Chiba prefecture. There lives Kyouno Madoka, a student at Kamogawa Girls' High School, and the only member of the Jersey Club. Madoka prides herself on being bright and energetic, and spends much of her time helping people.

However, her life changes one day when the mysterious girl Lan asks her to "pilot a robot". In order to protect the citizens of Kamogawa, Madoka agrees and engages in battle against extraterrestrial invaders.

Madoka and Lan are later joined by Muginami, and the trio works together to protect the Kamogawa seas, piloting robots called Vox.

Check out Attack on Titan Season 2

Many years ago, the last remnants of humanity were forced to retreat behind the towering walls of a fortified city to escape the massive, man-eating Titans that roamed the land outside their fortress. Only the heroic members of the Scouting Legion dared to stray beyond the safety of the walls – but even those brave warriors seldom returned alive. Those within the city clung to the illusion of a peaceful existence until the day that dream was shattered, and their slim chance at survival was reduced to one horrifying choice: kill – or be devoured!

Check out A Sister`s All You Need.

A Sister`s All You Need. 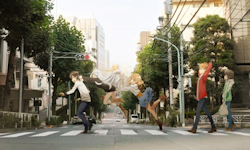 Itsuki is a novelist and "modern day Pygmalion" who works day in and day out to create the ultimate younger sister. He's surrounded by various other characters: a beautiful genius writer who loves him, his big-sisterly classmate from college, a fellow male writer, a sadistic tax accountant, and his editor. They're all looked after by Itsuki's perfect younger step-brother, Chihiro, who has a serious secret.