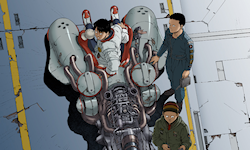 More than 160 years has passed since the orbital station (Skyport) fell on earth and wiped out all of humanity. The moon colony, Eden, has survived and expanded. In the year 2267, at the age of fifteen, Takeru is taking full advantage of Freedom - the short interlude between the end of compulsory education and the rite of becoming a full citizen. He has taken to hanging out with his friends and running his custom built vehicle in the local races. Angry at a racing loss, he goes for walk outside of the dome and stumbles across some strange items and pictures scattered about in a crater on the surface of the moon. Entranced by a picture of a girl standing under a blue sky, Takeru begins to ask questions that the Eden's ruling Foundation does not want answered.

For unknown reasons, The Foundation has perpetuated the myth that all life on earth has been wiped out and is willing to take extraordinary steps to keep the secret secure.

Well it looks like it's about time to open up the season for encoders. We have a second past encoder dusting off their encoding gear. Kij0 is getting back in the game so you can expect some more delicous encodes coming your way in the future.

IS: Infinite Stratos Encore: Sextet of Burning Love has been added to the Database

We have added this Series OVA to our database... 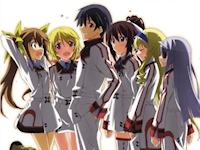 Ichika has gone home for the holidays. On one particular day, his rest is cut short when the girls start showing up at his doorstep one after the other.

IS: Infinite Stratos has been added to the Database

We have added this Series to our database... 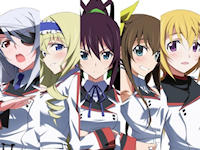 The story revolves around the IS Academy and its students who are training to become pilots for the IS (Infinite Stratos) weapon system. It so happens that this system can only be operated by females. However there was one young man named Orimura Ichika (15) who was able to use the IS. He then finds himself attending the busy academy dominated by girls. As it turns out Shinonono Houki, a childhood friend, is one of his new classmates.